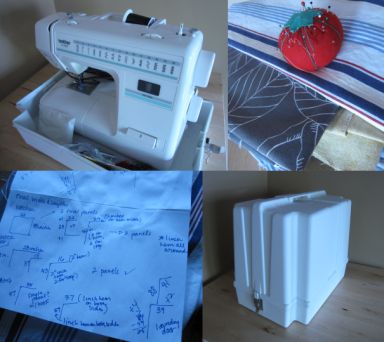 I am particularly a fan of the carrying case, eerily reminiscent of the special X-ray machine box that Will Smith carries around for the entire length of The Pursuit of Happyness.

A few weeks ago, I bought some cool fabric at IKEA (hooray for deals in the clearance bin) and set out to make some curtains and a few pillow covers. The only problem was that I did not own a sewing machine, nor had I sewn in many, many years. My debut was a stuffed animal, a purple coiled worm actually, in eighth grade (family and consumer science project), and I think the only other time I used a sewing machine was in college when I made a random pair of PJs for J. That said, I remember thinking back in eighth grade that it didn’t seem very hard, not even the bobbin-changing part, so I thought I could handle it now, fifteen years later… if only I had a sewing machine.

Luckily, I have a network of ambitious folks I know in my little town, so I sent out a query e-mail asking if anyone had a sewing machine that was actually portable. The truth is, I didn’t know what that would look like, but I assumed it would exist. The first reply I got was “I don’t even know how to sew on a button,” and that person shall remain nameless. But then I got four more responses–all positives!

So, voila! A sewing machine at my disposal. As it turns out, the bobbin-thing is kind of tricky, but courtesy of the internet, I was able to find instructions for this particular brand of sewing machine, complete with pictures. I was impressed with myself, if I do say so.

I made two sets of curtains, one over the sink and one in the laundry room, and two covers for throw pillows in our living room. If only I could get myself out to Fallmart for some white thread, I could finish up the other curtains I have planned. But my anxiety about that place has been described elsewhere.

Oh, one other thing: I didn’t even own any straight-pins when I started the project, so I borrowed those, too. I’ve been wondering why everyone I know has one of those stuffed tomato things to hold her pins. My mom sure did, my grandma did, J said his mom did, and these borrowed pins came with a tomato. Why? Why a tomato? Why not, say, an orange? Please shed some light on this.

My husband has helped out at Habitat for Humanity during our church’s annual “Mission Blitz” for the last two years, but this year it was pouring down rain. So instead of going to a work site and putting his power tools to use, he ended up sorting through window blinds at the Habitat for Humanity ReStore. If you haven’t heard of this place, you have got to find one and check it out.

Since then, we’ve come to know and love our Habitat for Humanity ReStore, and not just because the proceeds go to Habitat construction projects. For one thing, when J finally got me back there to look at a whole bunch of old-fashioned (i.e., second-hand) wooden window blinds that were a really great deal, we couldn’t find them with the other window blinds. After hunting for awhile, and nearly giving them up as sold to some other lucky soul, we found them piled near the door in the “FREE” bin. (“Cheapskate” is my middle name, after all.)

What makes ReStore even more appealing is that it’s right beside Fallmart (see this post for how I feel about Fallmart), so when we pull in at the light, I can glance over my left shoulder and say, “Take that, Fallmart! I prefer second-hand goods anyway–so there!”

That is my true nature coming out.

END_OF_DOCUMENT_TOKEN_TO_BE_REPLACED

Recently my husband and I each presented material to the media studies students at Madras Christian College. After our sessions we were escorted to the train station by one of the students in that department who got on the train with us to go home. It was a long ride home so we sat and chatted with the student for a long time. At each stop more people got on and the train became more crowded.

At one point a beggar lady came up to our seat and held out her hand. She didn’t appear poor. She seemed presentable and put together, with make-up and lots of jewelry. There’s never been a time when a beggar had not approached me on the train. But I had never seen this type of beggar.

END_OF_DOCUMENT_TOKEN_TO_BE_REPLACED

I have been to India three times, but every once and a while I get a scared feeling when I walk out on the streets. My heart beats a little faster and my body is a little more tense and uneasy. The feeling doesn’t last long, but every time it happens I feel a bit unsafe for just a moment.

Afterwards, I feel silly for even feeling this way.

During these moments, I am taken out of my comfort zone. My focus is narrowed in on my immediate surroundings and all sorts of present dangers.

END_OF_DOCUMENT_TOKEN_TO_BE_REPLACED

A few hours before the temperature dropped on Tuesday night and the rain turned to big, fat snowflakes, we found ourselves dreaming of summer. We’d spent the last few weeks flipping through our favorite heirloom seed catalog, circling the varieties we might want to purchase and dog-earing entire pages we wanted to revisit.

On Tuesday, we compiled our final list, discussing logistics of what we could reasonably manage to grow this year in our own garden, trying to be realistic about the amount of time we could devote to decorative and edible landscaping in the side flower beds we’ve mostly avoided in previous years, and brainstorming for a smaller relatively hands-off plot in our church’s community garden.

So much to think about. What would get sown inside in coming weeks versus what could wait to get planted outside? What would work best for companion planting to save space and enhance the nutrients of our soil?

So much to look forward to during this week of winter weather advisories and electric blankets.

There’s much to be said about gardening as a metaphor. It’s all over the Bible, especially in the parables of Jesus. It’s a metaphor for spreading the gospel, a metaphor for the health of our souls, a metaphor for the way we need to live in community with one another and with God. I am the vine, Christ tells us. You are the branches. The harvest is great but the laborers few. Faith like a mustard seed. Vineyards. We’ve got gardens at the beginning, gardens at the end, gardens in the middle. Seeds sown in all kinds of soils.

Certainly the practice of saving heirloom seeds is a metaphor for something.

Certainly the fact that we sat and planned our garden in the face of temperatures dropping radically outside and a wintry forecast headed our way could be a metaphor for something, too.

But who cares about metaphors when, really, all I wanted to say is this:

I love our heirloom seed catalog.

END_OF_DOCUMENT_TOKEN_TO_BE_REPLACED 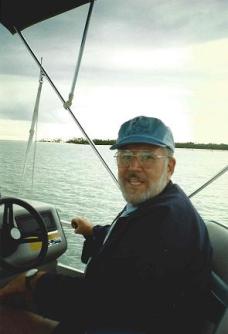 My Pappy Sands passed away on Sunday night, January 27th.

Alzheimers had slowly been stealing him from us for more than a year, but his sudden, rapid decline in recent days caught us by surprise. At Christmas, his family had gathered around him to sing carols together–and he sang along, knowing the words. In fact, when I greeted him in December, he kidded with me about wanting to call me Betty. Maybe it was confusion. Or maybe he was cracking jokes. Either way, he was in good spirits.

Pappy Sands and Grandma Bev, his wife, owned a campground in New Hampshire. Throughout my childhood, we often drove the nine-hour trip north through the night to visit in the summer, especially over my birthday, the day before Independence Day. Flipping through his old photo albums, there were an inordinate number of me opening birthday presents year after year after year.

Pappy and Grandma were snowbirds in the winter, and eventually retired to Florida. We frequently drove south to Florida–again through the night–to celebrate the Christmas holiday in the warmer weather.

So yes, lots of pictures of those Christmases, too. One year, for some unknown reason, I had a Christmas sticker on my forehead in every single photo. Why I put it there in the first place, I don’t know. Why nobody insisted I remove it after the first few photos, I really don’t know.

END_OF_DOCUMENT_TOKEN_TO_BE_REPLACED

Guess what came in the mail this week?

END_OF_DOCUMENT_TOKEN_TO_BE_REPLACED

Pardon me while I toot my own horn a minute.

than I typically run, even on the treadmill.

And it was super cold this morning.

And I had a baby 6 months ago tomorrow.

But enough about my awesomeness. That’s not the point of this post.

The “Run for Another 10K” was organized to raise awareness–and funds, of course–for Promise Kids a Future, a nonprofit international adoption agency. I signed up for it a few weeks ago because (a) it was for a good cause, (b) the 10k route was right here in my little town, and (c) I am a crazy person.

END_OF_DOCUMENT_TOKEN_TO_BE_REPLACED

I talked to my brother this afternoon and I need to say something.

Last Monday, he hopped on a plane and moved to Saudi Arabia.

Stephen and his lovely wife, Kelsie, have wanted to travel overseas for many years now and finally, finally have the opportunity to do so through Stephen’s work. So they sold all but 1,500 pounds of their earthly belongings and prepared to go. Then they flew from Washington State back to Pennsylvania two weeks ago, Stephen left Monday, and Kelsie and the kids hang out until they can join him in a few months when their visa paperwork goes through. (That means, of course, that Kelsie is very brave, too. I am in awe of her!)

But I’ll admit it: I’m not very happy about this whole situation. 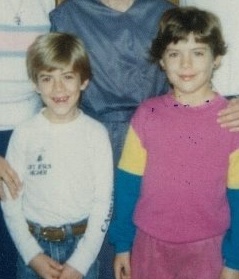 My brother and I are only 20 months apart–he’s older, though I’ve been bigger than him for most of our lives–and we’ve always been pretty close. Granted, for the last 12 years we’ve lived in different states but he’s still my big brother.

And different states is not the same thing as different countries, cultures, hemispheres, even if we will be able to Skype on a regular basis.

END_OF_DOCUMENT_TOKEN_TO_BE_REPLACED

I took Little Bean for a walk this morning and a new sign a few blocks from our house caught my eye.

That’s a new sign, I thought to myself. But as I got closer, something didn’t seem quite right.

I walked around to the other side of the sign. Yep.

Gosh, I love my small town.

Looking for something in particular? Search here.

Recent visitors to Texas Schmexas thought these pages were worth checking out: